Over the quarter, financial markets understandably remained focused on the global pandemic and its influence on economic growth rates, policy settings and whether an effective vaccine is close at hand.

The Victoria-centred outbreak looks to have come back under control at a cost of 2% of GDP growth to the Australian economy in the September quarter. Despite this, however, the overall economy may record a positive growth rate over the period bring an end to a fairly sharp and deep recession.

Unfortunately, the recent news on Covid-19 outbreaks overseas has not been encouraging, with a resurgence in cases across a wide range of countries, particularly those within the Euro Zone. Whilst rising in July and August, the Australian share market fell in September after the US share market was driven lower by technology companies and a setback in a Covid-19 vaccine trial.

Sentiment soured and the world has assumed the brace position, as the US Presidential election nears, creating uncertainty for markets. US economic activity appears to have recovered in the September quarter, as the unemployment rate continued to fall in September.

Despite this good news, we are unlikely to see the labour market return to how it was at the beginning of 2020 when the unemployment rate recorded 3.5%. It currently stands at 7.9% having reached a high in April of 14.7%. Retail sales continued to grow in August, albeit at the softest pace in four months.

Consumer confidence remained downbeat in August, which, coupled with uncertainty over the timing of another coronavirus relief package, should limit spending in the months ahead. Importantly, the Federal Reserve reiterated that the U.S. economy has a long way to go before recovering from the coronavirus pandemic and will likely require more support. This suggests further policy stimulus.

The Chinese economy is on track to become the only major world economy to grow in 2020 after consumer confidence recovered in the third quarter, although a lagging services sector meant the 4.9% increase in GDP missed market expectations of an increase of 5.2%. Exports and an increase in industrial output and retail sales towards the end of the quarter lent support to growth. Combined growth for the first three quarters of the year was 0.7%, putting China back into growth after the coronavirus pandemic led to a 6.8% decline in the first quarter. The economy will benefit from strong overseas demand for medical products and technological devices as well as solid new infrastructure investment.

A re-escalation of trade tensions with the U.S. and another wave of Covid-19 are the main downside risks.

Europeʼs economy is sliding towards a double-dip recession on the back of rising coronavirus infections and fresh government restrictions on peopleʼs movements.

Germany, France, the UK, Italy, Spain and the Netherlands have all announced measures to contain another wave of COVID-19 infections, with more expected in the near term. Belgium announced the closure of all bars and cafés for four weeks, while Switzerland widened its mandate for wearing masks. France put into effect a night curfew in Paris and other cities between 9pm and 6am. Like Melbourne, the nightlife economy has come to a complete standstill.

The European Central Bank held interest rates at zero and announced that it will continue its pandemic emergency purchase program worth a total of €1.35 trillion.

In Australia, the impact of the renewed lockdowns in Victoria resulted in significant divergence in the economic performance of Victoria from the rest of the country.

Overall, household incomes have been supported through the raft of fiscal and other measures, including super withdrawals and loan deferrals. Overall, the Federal Budget was a net positive to the outlook for domestic demand growth.In a recent speech, Reserve Bank Governor Lowe addressed the unusual feature of the current economic conditions being the massive increase in savings that has bolstered private sector balance sheets.

The Governor said that it was possible “that as restrictions ease, people will choose to draw on their accumulated buers to sustain and increase their spending”.

The key to this likelihood was confidence in health outcomes and the future state of the economy. In that regard, the surge in consumer sentiment should give him considerable encouragement. He noted that “As the economy opens up…. it is reasonable to expect that further monetary policy easing would get more traction than was the case earlier”.

It is expected that the policy will be eased further in the near term. It is likely that the RBA will cut the key policy rates (cash rate; three-year bond target; and Term Funding Facility) to 0.10% from 0.25% and the Exchange Settlement Account rate from 0.10% to 0.01%. The TFF allows banks to borrow from the Reserve Bank for three years at a generous rate of 0.25% up to a healthy limit.

Prior to October, the banks could collectively borrow $154 billion. That was boosted to $200 billion. Over the quarter, the Australian share market ended -0.44% lower with the 1-year return -10.21%. Over 5 years, the market has returned 7.31% per annum. Over the quarter, consumer-related companies benefit from the fiscal stimulus. Bunnings Warehouse, JB Hi-Fi and Woolworths were major beneficiaries. With consumers unable to travel and spend their money on other experiences they are back to spending on hard goods and refurbishments.

Iron ore miner Fortescue Metalsʼ share price increased 19.81% thanks to the strong demand for from China supporting the ore price. However, the banking sector continued to struggle as low-interest rates place pressure on margins.

Despite some improvements recently, bank bad debts remain elevated and expenses remain high as they deal with legacy issues from the Royal Commission.

Commonwealth Bank underperformed the other major banks as it took a far less conservative treatment in modelling future loan losses (also known as bad debts) to support its dividend. This was not well received by the market. Companies exposed to COVID-19 (travel, education) remain under pressure, although some of the results were better than feared including IDP Education and Corporate Travel Management. Afterpay (APT) continued its run, rising 33.41% in August alone, reaching a new record high and surpassing Coles and Amcor to become the 17th-largest company in the Australian share market after acquiring Spanish payments company Pagantis and doubling its revenue in the financial year 2020. Treasury Wine Estate the owner of Penfolds Wines declined after China announced it will begin an anti-dumping probe into wines in containers holding 2 litres or less from Australia.

International share markets performed well over the quarter with large companies outperforming small companies and emerging market shares outperforming developed market shares. The emerging-market shares were primarily driven by the resurgence in the Chinese share market as the number of reported Covid-19 cases remained low and the government increased spending to boost economic activity. Technology companies such as Apple, Microsoft and Amazon performed well over the quarter as the overall sector continued to find support from the combination of more profit certainty from these companies and the low level of returns from term deposits.

The gold price continued its record run, breaking through $2,000 for the first time. The actions of central banks to drive real (inflation-adjusted) interest rates lower makes cash and government bonds less attractive and gold is seen as an alternative safe-haven asset. In US dollar terms the gold price was 7% higher for the quarter however strength in the Australian dollar offset some of this rise. The gold price increased by 2.65% in Australian dollar terms.

Despite a big bounce in property trusts over the past six months (+30.14%), the listed sector remains 14.77% lower over the year.

The retail sector performed poorly due to the severity of the fall in retail sales. This hit Westfield operator Scentre Group and GPT Group. Industrial property manager Goodman Group performed well increasing by almost 20% over the quarter. A booming digital economy, aided by a global pandemic, drove industrial property owner Goodman Group to new heights in the first quarter of the new financial year as demand for warehouse rentals surged around the world. Goodman is working on a number of projects, including a giant 200,000 square metre fulfilment centre for Amazon in Western Sydney and another for Amazon in Brisbane.

Volatility has increased and will likely remain high. The US Presidential election, fiscal policy globally, low-interest rates and warp speed vaccine trials are all market sensitive events that will influence asset prices. Economic growth rates will remain patchy at best as labour markets will likely remain weak as we head into 2021. 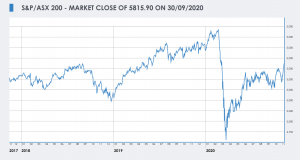